Costa Blanca is the tourist name by which is known the more than 200 kilometers of coast in the province of Alicante, in the southeast of Spain. The Mediterranean Sea bathes, with beaches and coves, this privileged area that runs, from north to south, from Denia to Pilar de la Horadada, adding up to a total of 19 villages.

The World Health Organization (WHO) has declared the climate of the Costa Blanca one of the best on the planet.

The 19 localities of the Costa Blanca, cited from north to south are: Denia, Javea, Poble Nou de Benitatxell, Teulada-Moraira, Benissa, Calpe, Altea, Alfaz del Pí, Benidorm, Finestrat, Villajoiosa, Campello, Alicante, Elche, Santa Pola, Guardamar del Segura, Torrevieja, Playas de Orihuela and Pilar de la Horadada. We could say that its capital per excellence is the city of Benidorm, since it is the one that receives more number of tourists, but all and each one of these villages, have their own charm.

Among mountains of pine trees, long valleys with fields of almond, olive, orange and tangerine trees spread out. Old stone terraces that reach to the top of the mountain make the landscape always surprising. In the fabulous mountains you can feel the intact nature. A multitude of signposted trails can lead us to impressive lookouts.

Gastronomy on the Costa Blanca.

Another characteristic of this tourist area is its gastronomy. The many restaurants along the Costa Blanca offer a wide variety of products, many of them made "as if at home". The Province of Alicante is synonymous of Mediterranean diet: from rice, in its innumerable variants to the many species of fish that the Mediterranean Sea provides. Alicante's olleta, the gazpacho, the stew with balls, and a host of delicious dishes. 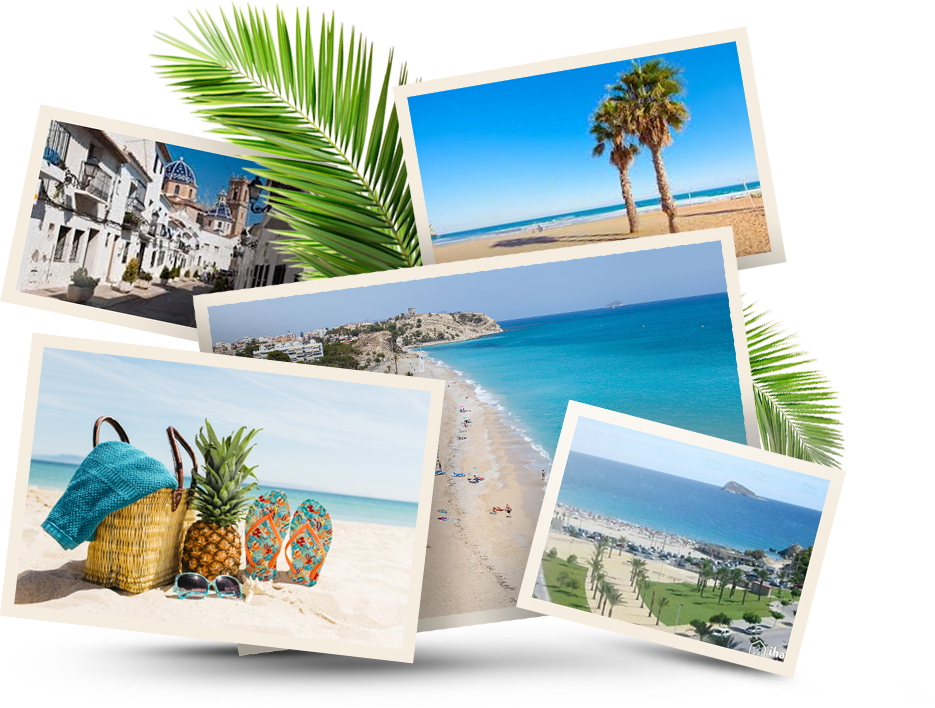 What to do on the Costa Blanca.

Obviously, the Costa Blanca is characterised by its more than 200 kilometres of fine sandy beaches. Any village we choose offers us miles of sand where we can enjoy the sun which is so deeply rooted in this tourist area. But not only of beaches can boast the Costa Blanca. In most of these villages you can enjoy street markets where visitors can find all kinds of articles. Every day of the week there is a market in a nearby village that allows the tourist to enjoy shopping or simply walk around looking at the products for sale. And if there's one thing this area can be proud of, it's its festivities. In most of these villages, the "Moors and Christians" celebrations are catalogued as festivities of autonomic or national interest. We cannot forget the Holy Week Processions. All along the coast, the brotherhoods wear their best clothes to "procession" with the figures placed on spectacular thrones.

Come to the Costa Blanca on vacation